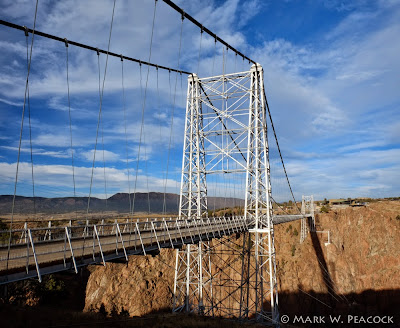 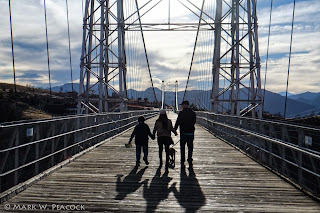 From 1929 to 2001, the Royal Gorge Bridge held the world record as the highest bridge in the world, crossing the gorge 956 feet above the Arkansas River outside of Cañon City, Colorado. It remains the highest bridge in the United States. The deck of the suspension bridge consists of 1,270 wooden planks which lead visitors 1,270 feet to the other side -- and what a thrilling walk it is. Looking over the edge down into the canyon is a dizzying, awe-inspiring sight. Far below are the rapids of the Arkansas River and the Royal Gorge Railway. 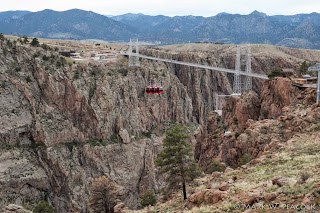 Completed in six months in 1929 at a cost of $350,000, its purpose from the beginning was tourism, not transportation. Since then the bridge has been renovated and strengthened and numerous other attractions added to the 360 acre park:
So much more planned in the future! Click here to see the long range plans for the Royal Gorge Bridge and Park area! 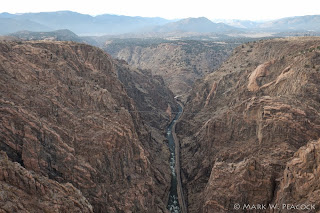 The fact that the bridge is here today at all is really a miracle considering the extensive damage the park suffered during a wildfire in 2013. The fire began on the south side of the gorge and proceeded to 'jump the gorge', ultimately destroying 48 out of 52 of the buildings and burning 2,156 acres of the park. The bridge itself emerged relatively unscathed, with only 100 planks suffering damage. Click here to read more about the fire. For photos click here. For video of the damage here. The speed of the rebuilding efforts was  amazing. The new visitor's center is beautifully done. To date, volunteers have planted 10,000 seedling pine trees on park property. Incredibly, the park reopened 14 months after the fire. 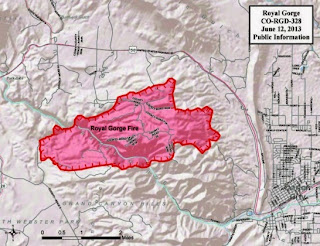 The official website of the Royal Gorge Bridge and Park is very well done and a great source of information for anyone planning a visit.

Want to get out and explore the terrain around the park for yourself? Hike the Overlook Loop Trail or the Canyon Rim Trail.

For more on the history of the Royal Gorge Bridge, Part 1 and Part 2.

Thanks for visiting and joining in the discussion on Rocky Mountain Treks! Your comment will be sent to me to be approved. Sorry for this added step, but it is necessary to avoid spam. Thanks for taking the time to leave a comment!

Map with Links to Hikes and Attractions 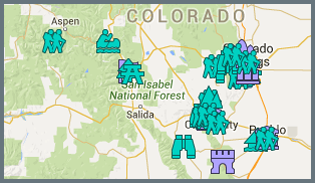 Introduction: Before moving to Colorado, I lived in the beautiful hills of east Tennessee, exploring and sharing my finds on my blog, Appalachian Treks. On this blog, I chronicle all the amazing experiences I've had in the Centennial State. Click the "About" tab above for my full bio. Get out and explore!